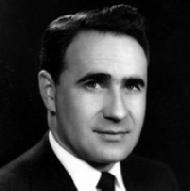 George P. Jouflas passed away
from natural causes at St. Mary’s
Hospital in Grand Junction on
June 16, 2012. He was 87 years
old.
George was born November 4,
1924, in Grand Junction to Peter
Jouflas and Dorothy (Anadiotes)
Jouflas. He spent his summers at
the family ranch on the Frying
Pan River near Basalt, CO and the winters in Grand Junction. He
attended Grand Junction High School, graduating with the class of
1942. He attended the University of Colorado for two years.
George was a Rancher and Real Estate Broker. He was involved in
investments, including Real Estate and Oil & Gas.
He married Helen Arlene Horton on October 18, 1953 in Grand
Junction. She preceded him in death.
George enjoyed many accomplishments during his life. He witnessed
enormous changes in the ranching community as Eagle
County made the transition to a year round, world renowned resort.
He took great pride in the stewardship of the land he loved.
He was a member of the St. Nicholas Greek Orthodox Church, the
Masonic Lodge in Eagle, Colorado, the Elks Lodge 575, and was an
honorary Lifetime Member of the Red Sky Ranch Club in Wolcott,
Colorado. His most treasured role, however, was that of Papu
(grandfather), father and brother. George’s interests included flying,
cars, fishing, and hunting.
George is survived by his children, John of Wolcott, CO; Greg of
Grand Junction, CO; James of Wolcott, and Jan-Marie of Wolcott;
brother, Chris of Grand Junction, and six grandchildren.
A viewing is planned for Friday, June 22, 2012 from 7 - 8:00 p.m.
at Callahan-Edfast Mortuary. A funeral service will take place June
23rd at 12:00 noon, also at St. Nicholas Orthodox Church, 3585
North 12th St., Grand Junction. Father Luke Uhl will officiate.
Donations in George’s honor may be made to the St. Nicholas
Greek Orthodox Church.

GEORGE JOUFLAS SERVICES SET FOR SATURDAY.
One of the valley's originals died Saturday.

George P. Jouflas, 87, was surrounded by his family when he died in Grand Junction, at St. Mary's Medical Center.

A Trisagion Prayer Service is scheduled for 7 p.m. Friday at Callahan-Edfast

The funeral service is scheduled for noon Saturday at St. Nicholas Greek Orthodox Church. Burial will follow at Municipal Cemetery.

To say George Jouflas was a rancher is a little like saying Rembrandt painted a little.

He, Chris and the rest of the Jouflas family built the Jouflas ranch into one of the nation's largest sheep ranching operations. At its peak the ranch ran more than 20,000 head of sheep.

After George stopped ranching in the mid-1960s, he opened one of the first real estate offices on Vail's Bridge Street, Western Colorado Land Company.

The family ranch is now home to spots like Red Sky Ranch.

EAGLE COUNTY — George Jouflas seemed to have nine lives and lived them all.

He died Saturday, surrounded by family and friends. Services are scheduled for this Saturday in Grand Junction.

The Jouflas family and other local ranching families were pioneers before there were Vail Pioneers.

George was an entrepreneur, pilot, sheep rancher, bought and sold real estate, and was the eldest son of Greek immigrants. But more than all that, he was one of the all-time great characters and charming deal-makers. The man could play strip poker with the devil and never feel a draft.

The three Red Sky Ranch golf courses are built on part of the Jouflas Ranch.

“Who would have thought there would be three world class golf courses where we spent all those years running sheep?” George used to ask, smiling.

George's son, Greg Jouflas, tells about the time George's father, Peter, was driving around with sheep in the back seat of his new Cadillac.

Peter used to buy a new Cadillac every other year and this one was a deep maroon road yacht — a thing of beauty.

A man named Nicholson owned the gas station/soda fountain/grocery in Avon. One time when Peter pulled in to the fill up the tank, he had three lambs in the back seat.

Nicholson came out to pump the gas, spotted the lambs and acted horrified. “Why do you have sheep in your beautiful new car?” he asked.

“Why shouldn't they ride in it? They paid for it,” Peter retorted.

“My dad never stops talking about his dad. He loved his dad so much. It makes me think I'll be talking about my father for the rest of my life,” Greg said.

The stories change and grow, as do the people in them.

There was the time Greg was fly fishing and stuck a hook in the back of his head.

The valley was a rough and tumble place back then and medical care was pretty much theoretical. George drove him toward the nearest doctor and as they rolled past Eagle headed west on Highway 6, they spotted a big cardboard sign reading, “Doctor Wanted.”

They had to drive all the way to Grand Junction to roust a veterinarian to cut the hook out.

He owned his own plane and was a pilot. He loved cars, fishing, hunting and his family.


Ranching life
In the Jouflas family, “ranch” is an action verb.

“You worked at it every day. You ranched,” said Chris Jouflas, George's younger brother.

George, Chris and the rest of the Jouflas family built one of the nation's largest sheep ranching operations. At its peak, the ranch ran more than 20,000 sheep on tens of thousands of acres.

“Land, that's real. You can't sleep or grow anything to eat on a stock certificate,” George was fond of saying.

George and Chris's mother, Dorothy, used to marvel that people came to the valley in the winter.

“Are these people crazy? Even the birds fly south for the winter,” she said.

“He took great pride in the stewardship of the land he loved,” his family said. “His most treasured role, however, was that of Papu (grandfather), father and brother.”