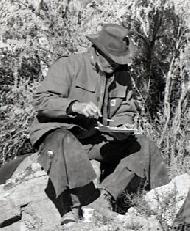 Memorial services were held Tuesday for John T. BENTON, 63, of Burns. Mr. BENTON was killed last week in a plane crash in southern Routt County.
He was born in Denver on Aug. 28, 1927, to Carolyn Curry and Thomas Harry BENTON, who ranched in Burns on the family homestead. His childhood was spent in Burns and Denver.
In an Enterprise article in 1989, BENTON recalled, "When I was in sixth grade, my parents sent me to Denver to go to school...I thought I was being punished."
By the time Mr. BENTON was attending high school in Denver, World War II was raging. His parents sent him to a military academy in Roswell, N>M>
He served in the U.S. Army Air Corps upon graduating from the New Mexico academy. When he returned to civilian life, Mr. BENTON completed his education at Arizona State University in Tucson and at Colorado State University in Fort Collins. He graduated with a B.S. degree in general science and animal science.
Mr. BENTON then returned to his father's ranch in Burns where he eventually assumed its management.
In 1952, he married Rae M. MORRIS on Jan. 11 in Denver. He also joined the Colorado Cattlemen's Association that year and went on to serve as president and board member of that organization.
At the time of his death, Mr. BENTON served as chairman of the Eagle County Planning Commission and the National Western Livestock Association. He was also very active in civic and business organizations serving as a director for the 1st National Bank of Glenwood Springs from 1960-1990; a member of the Colorado Water Conservation Board from 1974 to 1977; a member of the Bureau of Land Management Range Advisory Board and the Valley View Hospital Board in Glenwood Springs.
In 1975, Colorado Governor John Vanderhoof appointed Mr. BENTON to the Colorado River Water Conservation District from 1975 to 1980.
He was also a member of the Masonic Castle Lodge No. 122 A.F. & A.M. at Eagle and a member of Alpha Zeta Honorary Society.
Mr. Benton was an avid sportsman who enjoyed hunting, fishing and travel. He was also a strong advocate in land, cattle and tax issues.
Preceded in death by his father, he is survived by his wife, Rae M. BENTON of Burns, his mother Carolyn C. BENTON, of Sun City West, Ariz.; two sons, John Harry BENTON of Denver and Thomas Ray BENTON of Grand Junction; daughter Cindy BURGESS of Denver; and two sisters, Alzora "Zoe" MILLER of Litchfield Park, Ariz., and Ellen WARNER of Sun City West, Ariz. He is also survived by two grandchildren, Andrew BENTON of Denver and J. GARRETT of Grand Junction.
Callahan-Edfast Mortuary was in charge of funeral arrangements. A memorial service was held at Eagle United Methodist Church Tuesday, Feb. 19, with the Rev. Keith THOMPSON officiating. Interment will be private at a later date.
Memorial contributions can be made to Colorado Cattlemen's Association Endowment Trust Fund in memory of John T. BENTON, c/o Colorado Cattlemen's Association, 220 Livestock Exchange Building, Denver, Colo. 80216.

John T. BENTON 1927-1991, by Kathy HEICHER.
Friends and relatives of John T. BENTON gathered in Eagle yesterday to remember the Eagle County cattle rancher.
BENTON, 63, was killed Feb. 11 in the crash of a small plane about 30 miles north of Eagle. BENTON and three companions, who also died in the crash, were viewing ranch land in the area.
A third-generation Burns cattle rancher, BENTON was known for his leadership in the cattle industry and for his roles as a local Republican Party activist and as an advocate for land, cattle, and tax issues.
He was a charter member of the Eagle County Planning and Zoning Commission when it was formed in the early 1970s. He was re-appointed to the commission about 10 years ago, and was chairman of the board at the time of his death.
In northern Eagle County, the name BENTON is synonymous with cattle ranching.
BENTON's grandfather, Frank BENTON, first bought ranch land in Burns in 1907 and incorporated the Benton Land and Livestock Company. Both Frank BENTON and his son, T. Harry BENTON, continued to buy up the neighboring properties to expand the ranch holdings. Currently, the Benton ranch is estimated to total just over 14,000 acres of land.
John BENTON was born on Aug. 28, 1927, in Denver. He spent his entire life, excluding his secondary school years, college and military service, on the ranch. He married Rae MORRIS in January 1952.
BENTON joined the Eagle County Cattlemen's Association and the Colorado Cattlemen's Association in 1951. He served two terms as president of the local association and was president of the statewide organization in 1972-73.
He also worked on the tax committee of that organization, and was instrumental in establishing the productivity basis used for assessment and valuation of agricultural land in the state.
Locally, BENTON was active as a Republican Party Committeeman, and served a term as that party's chairman. He was appointed by former Colorado Gov. John VANDERHOOF to serve on the Colorado River Water Conservation District from 1975-80.
He also served on the Bureau of Land Management Range Advisory Board; and on the board of directors of Valley View Hospital in Glenwood Springs, and of the First National Bank of Glenwood Springs.
BENTON was a member of the Castle Masonic Lodge No. 122 at Eagle, the Alpha Zeta Honor Society and the Western Livestock Association.
He was an avid sportsman who enjoyed hunting, fishing and travel.
He is survived by his wife, Rae, of Burns; two sons, John Harry BENTON of Denver and Thomas Ray BENTON of Grand Junction; a daughter, Cindy BURGESS of Denver; his mother, Carolyn C. BENTON of Sun City West, Ariz.; two sisters, Alzora "Zoe" MILLER of Litchfield Park, Ariz.; and Ellen WARNER of Sun City West; and two grandchildren.
Contributions may be made in his memory to the Colorado Cattlemen's Endowment Trust Fund, in car of the Colorado Cattlemen's Association, 220 Livestock Exchange Building, Denver, Colo. 80216.

RANCHING AND POLITICAL FIGURE DIES IN WRECK. JOHN BENTON AND THREE OTHERS KILLED IN PLANE CRASH NEAR FLAT TOPS.

DIED IN AIRPLANE ACCIDENT NEAR BURNS, COLORADO
CONNECT WITH US